The third work of the Custom #X series; 5 “DIY” (Do It Yourself) pieces working on the idea of the performer as a customer-user, which are pre-produced by the performers via the recording of several video clips and the massive incorporation of personal data.

In Custom #3, the instruments behave as trackpads or surfaces abstracting the performers’ action on the screens behind them. The self-referential plays a determinant role, being the time and its representation through two stopwatches (always visible), the backbone of the conceptual background in the piece; shortly expressed, the performers just manipulate the reproduction of a hypothetical one-minute sequence, grouping, ignoring or highlighting some of its events. By this way, their user condition, as well as the fact of inhabiting a flat temporal dimension, places them into a massive amount of audio-visual information.

In the words of conductor Nacho de Paz: “after the rhythmical-temporal skeleton of the sonorous and visual events, articulated by an instrumental and electroacoustic corpus, the score determines a video track, absolutely synchronized with every musical motif. Therefore, the musicians are the subjects of a self-counterpoint, developed into the virtual layer. The fusion between both dimensions, conceived in an analogous way to the cinematographic montage, allows the composer to transform the semantics of images and audios. It is due through the alteration in the order of appearance and repetition of some invariable elements (for instance, the performers’ faces). This centenary technic, well known as the “Kuleshov effect”, acquires in Custom #3 a renewed worth, also fairly related to the stream of sonorous events”.

The subtitle “Big Data” refers to the storage of huge amounts of digital information through algorithmic patterns, which classify them by finding repetitive components. In this way, a first view of all the materials composing that fake minute, apparently not related between them, is the key for a subsequent constant association. This systems of information treatment, known under the name of “clustering”, make possible to find common features among vast groups of individualities and are generally used in social networks, apps or electronic commerce”.

The video projection of this piece is personalizaed by the performers via the recording of several fragments, which are treated and indexed into the final project. The performers’ personal profiles on different social networks also are used as a digital stage. Thus, they fix their identity and the here-and-now of every performance. Together with the score, some instructions and video examples are provided, which have to be followed in the recording. Besides, the team of BELOS Editions will assist them during the whole process, so as to achieve the best outcomes. 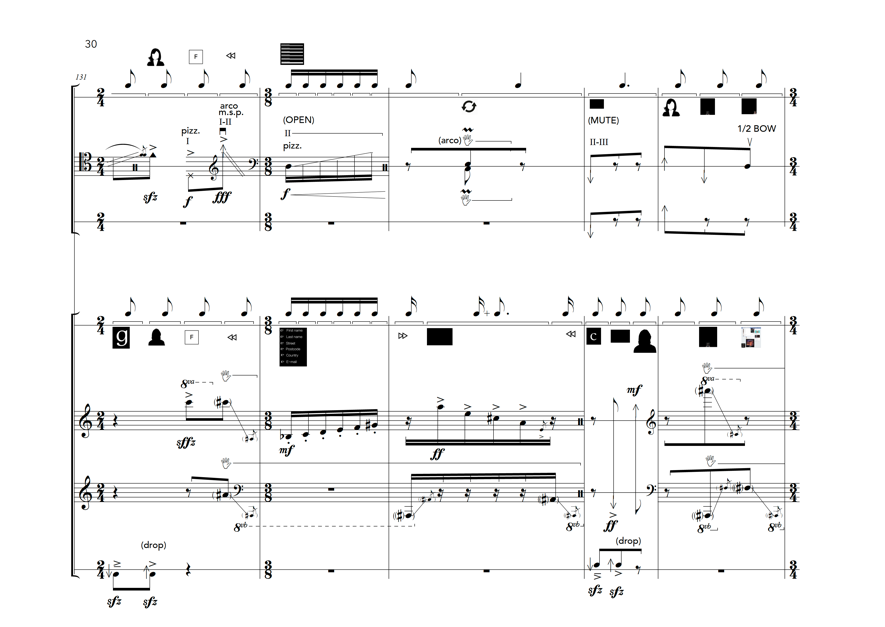